INDIANAPOLIS - Coach Nate James is the newest member of the Duke coaching staff and his presence is already being felt in the program.  James was coaching and talking with the Plumlees, Thomas and Zoubs as they came off the court in Duke's big win over West Virginia which put them in the championship game.  James took time to chat with BDN after the game. 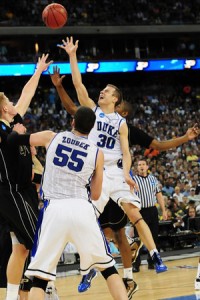 INDIANAPOLIS -  Duke ripped West Virginia by 21 points on Saturday night and that means the Blue Devils will play for the National Championship on Monday.  A big part of the reason Duke won was the play of Jon Scheyer where he scored a team high 23 points.  Scheyer was swarmed by the media after the contest and while he was happy with the win, it was clear that there was one more game to go.

BDN's coverage from Indy continues today as we'll be on the scene for more player and coach interviews.

DURHAM - Nolan Smith opened up about his Dad and much more in this interview just before the team headed to Indianapolis.

** We are now in Indy and reports start tomorrow.

DURHAM - The Duke Basketball team addressed the local media one last time Tuesday afternoon before their trip to Final Four in Indianapolis.  Brian Zoubek shared his thoughts on how Duke got to the semi finals and the learning curve and setbacks he had while at Duke.  Zoubek has been a key piece in Duke's run for the title and his continued good play could certainly help Duke get past West Virginia on Saturday.


DURHAM - Selected Duke Men's Basketball  players addressed the media in Cameron Indoor Stadium today and BDN was on the scene before we head out to Indianapolis for the Final Four.  In this audio chat, Mason Plumlee talks of his homecoming and more.  Check back in for our Duke-West Virginia preview, more player interviews and a interview with Quincy Miller and more as the week progresses.