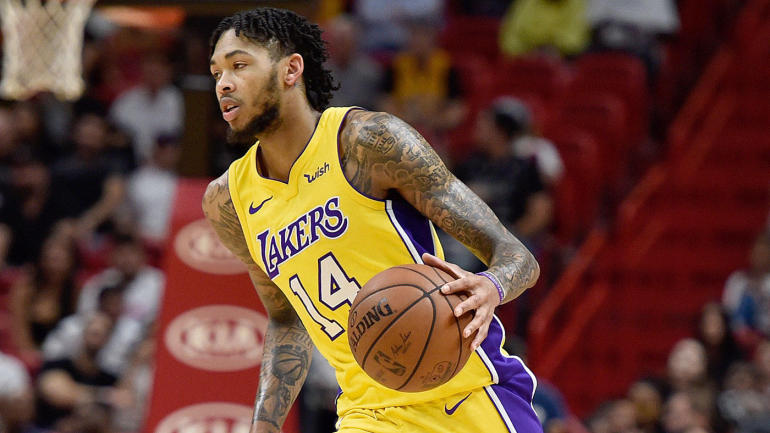 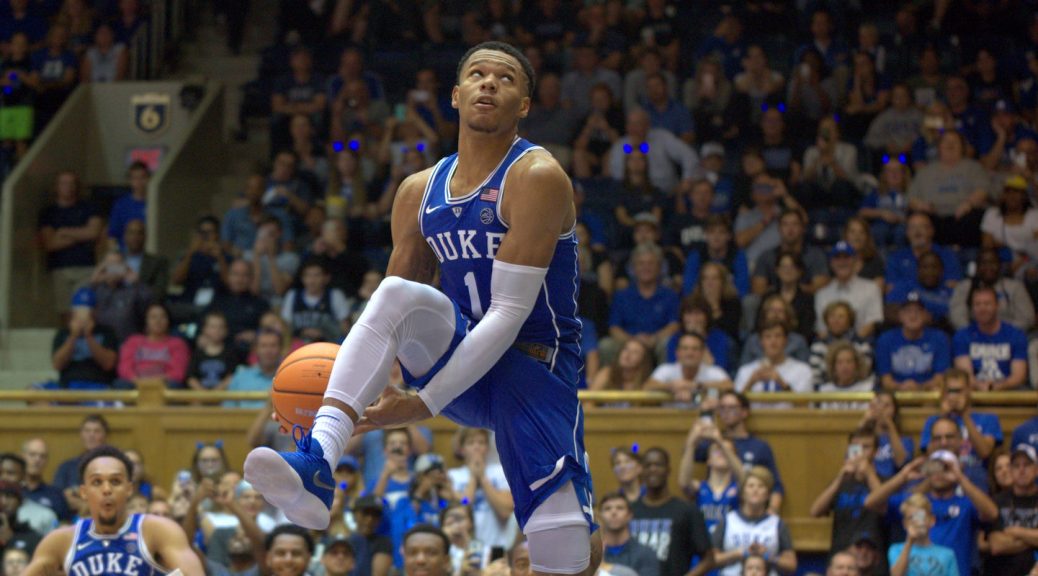 Well, Duke got a much-needed road win over Pitt last evening.  Here are my 10 random thoughts on Duke Basketball going into the next game.

The Blue Devils impressive  ACC road win over Pitt 87-52 cured many ills.  I will take a look back as my random thoughts progress, but the most important thing for Duke to do is put this game to bed.  Duke needs all the rest they can get before Saturdays high noon game with Wake Forest.  And just mere hours later, they will board a flight for Miami in a critical road match up.

That is why Duke played their depth

Come on.  You know it was fun to see Justin Robinson knocking down three pointers on his way to a career high.  Duke got major minutes from its bench players last evening and it was by design.  With games coming at a fast and furious pace, the Blue Devils need to rest their iron men starting rotation.  With injuries to Marques Bolden and Javin DeLaurier, Duke was able to steal some minutes and develop its bench against an even younger than they are Pitt team.  Those minutes will improve team camaraderie via involvement.  The team will benefit from strategic resting of players legs in certain games in the long haul.

Double-doubles are the norm for Bagley III

How ridiculously spoiled we are for now expecting a double-double from Marvin Bagley III each time out.  Last night he scored 16 points and pulled down 15 rebounds and he happens to lead the league in scoring and rebounding.  If you are counting, that was his 13th double-double which puts him one game shy of the record held by Jabari Parker and Gene Banks.  This young man is special.

If you follow my Blue Devil Nation twitter feed, you saw where I retweeted video of former Duke player Jabari Parker moving well in the pre game for the Milwaukee Bucks.  Parker is expected to return to the Bucks before the NBA All Star Break.  Parker underwent his ACL surgery on Feb. 14, 2017, after tearing that ligament — for the second time in his career.

Staying on the NBA for a moment

How cool is it to see so many Mike Krzyzewski era Duke Blue Devils playing key roles in the league?  I must admit to being a bit of a Boston Celtics fan now that Kyrie Irving and Jayson Tatum are both starting and tearing it up.  But I like following Brandon Ingram and all the rest as well.  Back to my twitter feed, you can vote Blue Devils into All Star game considerations with retweets.  So, get at it!

With every starter hitting double figure scoring and JRob's points off the bench -- Duke had six players in double figures for the first time this season.

I want to talk about Gary Trent Jr.

A shooter has to keep shooting even when their shot is off.  But there have been some games this season when Trent Jr. IMHO, may have taken too many shots.  We saw the best of Trent Jr. last evening where he allowed the game to come to him while getting other teammates involved.  He looked for his teammates first and that led to his career high in assists.  Trent then scored at will down the stretch after finding a balance or comfort zone.  And do not overlook his 2 of the 11 Duke steals.  He is a good defender capable of getting even better.

There has been a lot of talk about the Duke defense and for good reason.  Until last evening and in select other games they have not been very good in that area.  But don't overlook the positives with this team.  Duke leads the nation in scoring at 93.5 ppg.  Duke is 2nd in the nation in rebounding and close to the top in scoring margin of win.

And then there is Trevon Duval

It's Du-val.  Think Val Kilmer.  While many are figuring out how to pronounce his last name, Duval is quietly leading the ACC in assists.  What burning minds want to know is if that 3 of 5 from the three-point line was a mirage.  If he hits that shot at a 40% clip, his game would go through the roof.  Of course, he was just over 16% going into last evenings win over Pitt.

And then there is Wake the snake

Will Duke allow for Wake Forest to slither into this  game and challenge them in Cameron at high noon this Saturday?   Wake had a six game winning streak after a slow start to the season and they took UNC down to the wire in Chapel Hill.  They most recently lost to a good Virginia Tech team at home.  Hidden in the stat line from that game is the fact they outrebounded their opponent by ten and connected on nine three-point shots.  You cannot overlook them, but Duke certainly needs to come away from this game with a win.  And then go to bed.  Back to random thought number one here... Duke will fly all the way down south to Miami and be hit by the body shock of its warmer weather.  The team will have about 50 hours in between the end of the Wake post game meal and their next opponent.

Stay tuned for the next 10 Random Thoughts on Duke Basketball coming next Tuesday after the game with Miami.  One more thing, we are still doubling the time of premium memberships through January.  You can get two years for the price of one or a full year for the six month price.   Help support BlueDevilNation.Net by joining at this discounted rate -- 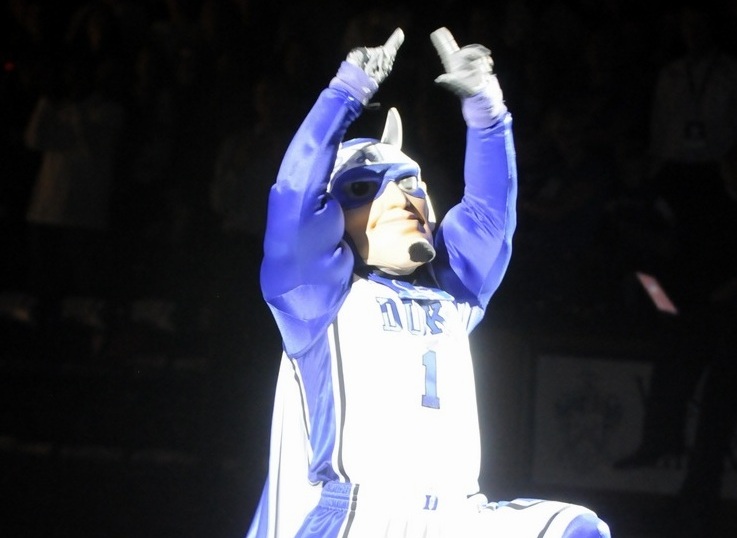 Take your vitamins now Duke fans for there is a busy, yet fun weekend coming up.   It all starts this Friday at 6 p.m. when Coach Mike Krzyewski and the Blue Devils basketball team takes on Presbyterian in Cameron Indoor Stadium.  The very next day, Duke (8-1) will host Virginia Tech in football at high noon in Wallace Wade Stadium.  And later that evening, Duke will play its second basketball game of the young season against Fairfield at 8 p.m. in Cameron, again.

Yep!  That's three games tipping or kicking off on campus within 26 hours.  I suppose that makes for a maniacal experience for many and it's sure to keep a lot of scribes banging at their keyboards from duck until dawn.  That said, let's take a look at the two basketball games sandwiching a huge football game in between in the latest Monday Musings.

The Season Opens For Duke Basketball

There is no shortage of excitement for this years tip off to the men's basketball season at Duke and for good reason, or reasons.  Firstly Coach Mike Krzyzewski will win his unprecedented 1000th collegiate basketball victory unless half the team is goes down to injury.  Yes, that was sarcasm for this years team is truly loaded.  It all starts with an incredibly talented and mature freshman class which features the much hyped Jahlil Okafor.  Blend the group which includes Tyus Jones, Justise Winslow and Grayson Allen in with some key vets like Amile Jefferson, Quinn Cook, Matt Jones, Rasheed Sulaimon, Semi Ojeleye, Marshall Plumlee and you have a pretty darn good team.  Anyhow, they will take on the Blue Hose who hope the second part of their last name doesn't get a letter added by games end.  Presbyterian is led by Jordan Downing who is a Big South Pre Season All Conference Team player,  Downing is a guy they need on the court and he is a prolific scorer.

Enter The Hokies At Noon On Saturday

Wallace Wade should be rocking when a traditional ACC power Virginia Tech comes to town.  What makes the Hokies dangerous is that they are coming off a bye week and they'll be hungry to avenge last seasons home loss to Duke.  The word out of Blacksburg is that they expect to sweep their final three games and carry a 7-5 resurgent record into bowl game.  But Duke is on a roll and they are fighting to get back to Charlotte for the ACC Championship Game.  The Blue Devils have become not only a good team under David Cutcliffe, but a good program.  The Blue Devils are firmly ranked in the polls, but they want to prove the few doubters remaining wrong and solidify their standing as a program that has arrived.  This will be a physical battle between to very hungry teams and Wade will need their Wacko's to be there and into the game from start to finish and wearing their Duke Blue.

By the end of the evening, the Duke Men's Coaching Staff will have a much better idea of what their team is capable of doing this season.  With two games in two days, Duke is likely to play a lot of players and combinations and that'll be fine by Coach K.   Early in the season, Krzyzewski is known to experiment with his line ups.  We'll see right off the bat how his team responds to two games in two days which is what you will get at year's end in tournament settings.  The opponent for Duke will be the Fairfield Staggs who are coming off and exhibition win over Bridgeport.  The player to watch for the Staggs will be Marcus Gilbert who scored 26 points in the win.  Look for Duke to try to push him off the three-point stripe where he is effective.  It's bit of a rebuilding year for the Staggs who are picked at the bottom of their conference.

We checked with some local motels and there are a lot of rooms booked for the weekend but plenty left if you're willing to drive some reasonable miles.  There are some tickets left at GoDuke for the football game.  If you cannot attend this weekend, tune into Blue Devil Nation who will be at all three games.  For those who cannot make the trip to Durham for the games, both basketball games and the football contest will all be carried by ESPNU.

Duke Had a Visitor And Will Get Another

Caleb Swanigan, a 6-8 post player from the Class of 2015 visited Duke during its exhibition basketball game win this past weekend.  Swanigan has offers from pretty much everybody.  Duke will get a visit from their main target in the lithe Brandon Ingram this Saturday as well.  He is considering neighbors UNC and NCSU as well and recently visited UCLA.   More talk on him for members of the Blue Devil Nation Premium section.

Follow our football staff at Bob Green @JBobGreen, Patrick Cacchio @PatrickCacchio.  For basketball and football, that would be me @BlueDevilNation.Net.  Also please like our slowly being built Blue Devil Nation Facebook page and if you are a Duke fan join our popular Facebook Group Blue Devil Nation where you'll find great Duke content.

Normally top rated prospects from Kinston flock to North Carolina, but Brandon Ingram could break that mold.  Ingram is a slender, yet talented small forward prospect <!--more--> and he happened to grow up a huge Duke fans.  Ingram showed well during the recent HS OT Invitational in Raleigh and he took time to chat up Blue Devil Nation during the event - [private]